Denon vs Pioneer DJ: Will the SC5000 become industry standard?

Will the Denon SC5000 become the industry standard player?

After playing on the Denon SC5000 prime and X1800 mixer, to plan and create a short club routine (WATCH HERE) we thought it best to give our overall opinion on whether it deserves a place in DJ booths around the world. Let’s compare the new players from Denon with the industry standard Pioneer CDJ range.

The Denon SC5000 sure has caused a stir in the DJ industry recently. With Denon struggling to get their hold back in the DJ market for so many years they have now decided to go full force against Pioneer DJ and try to shake up what has become industry standard. It’s no doubt that Pioneer DJ have dominated DJ booths around the world, but has that come to an end?

Firstly a huge thanks to Bop DJ for letting us borrow the equipment to review and have a play with. Watch the video below to hear our thoughts. Then read on for a more in depth comparison between the Denon and Pioneer players/CDJs.

There is something so fitting about basically having an iPad on the top of a DJ player. Technology is advancing at such a pace and we’re all so used to the touch gestures we use on a daily basis. It’s only a natural progression to add that to the DJ set up.

I personally am not a fan of having performance features such as hot cues or loop functions built into touch screen functions like that on Pioneer’s XDJ 700 and XDJ 1000s. I like to have tactile buttons for my performance tricks and techniques however it is way more convenient when it comes to navigation being able to touch, swipe and pinch the screen. It genuinely feels like there is a computer on board the Denon SC5000… and that’s because there is!

The next feature I really loved when having a go on these players were the performance pads. Having access to all 8 hot cues and another 8 saved loops is amazing! Pioneer currently only offer 8 hot cues and loops combined in their latest offering, the CDJ 2000 NXS2. One downside to Denon however is that the hot cues and saved loops are in two different pad modes. With Pioneer you can have a hot cue and a saved hot loop right next to each other. For creative purposes I prefer Pioneers design over Denon’s but I would love to see 8 pads rather than two banks of 4 hot cues on the Pioneer CDJ/XDJ range.

Something else to note about Denon’s saved loop feature is that the pads work as a toggle switch, turning the loop on and jumping to it. Then another hit of the pad deactivates the loop. With Pioneer CDJs every time you hit a hot loop it jumps to that point and activates the loop.

It’s an equal round, they both have pro’s and cons

Denon boasts 3 USB slots and an SD card slot. That’s a lot of storage to choose from. I like it! Why shouldn’t we have more than one USB slot. This makes your changeover even simpler. We all know how terrifying it is ejecting somebody else’s USB when taking over from another DJ in the club. Have you got the right side, is it the linked USB or not? This eliminates that problem!

Denon’s analysis seems to be on a par with Rekordbox from the few hours I’ve spent using it. Both seem to struggle getting the grid placed on the downbeat when analysing Hip Hop, R&B or anything that’s not got a straight 4×4 kick drum. Either way, both programs and players allow you to edit the grids with ease. Denon has the ability to halve or 2x the bpm value on the payer itself which is a nice touch but not an overall selling point.

Something that Denon do win over Pioneer with, is the players ability to analyse files that haven’t already been analysed. With Pioneer you’re going to have to put everything through Rekordbox first. With Denon you can run your music through Engine Prime (Denon’s analysis software) or just put it straight on a USB and let the player analyse the tracks as you go along. Click here to find out more about Denon’s Engine Prime software!

Again its a pretty equal round however Denon edges it. 1/2 Point to Denon 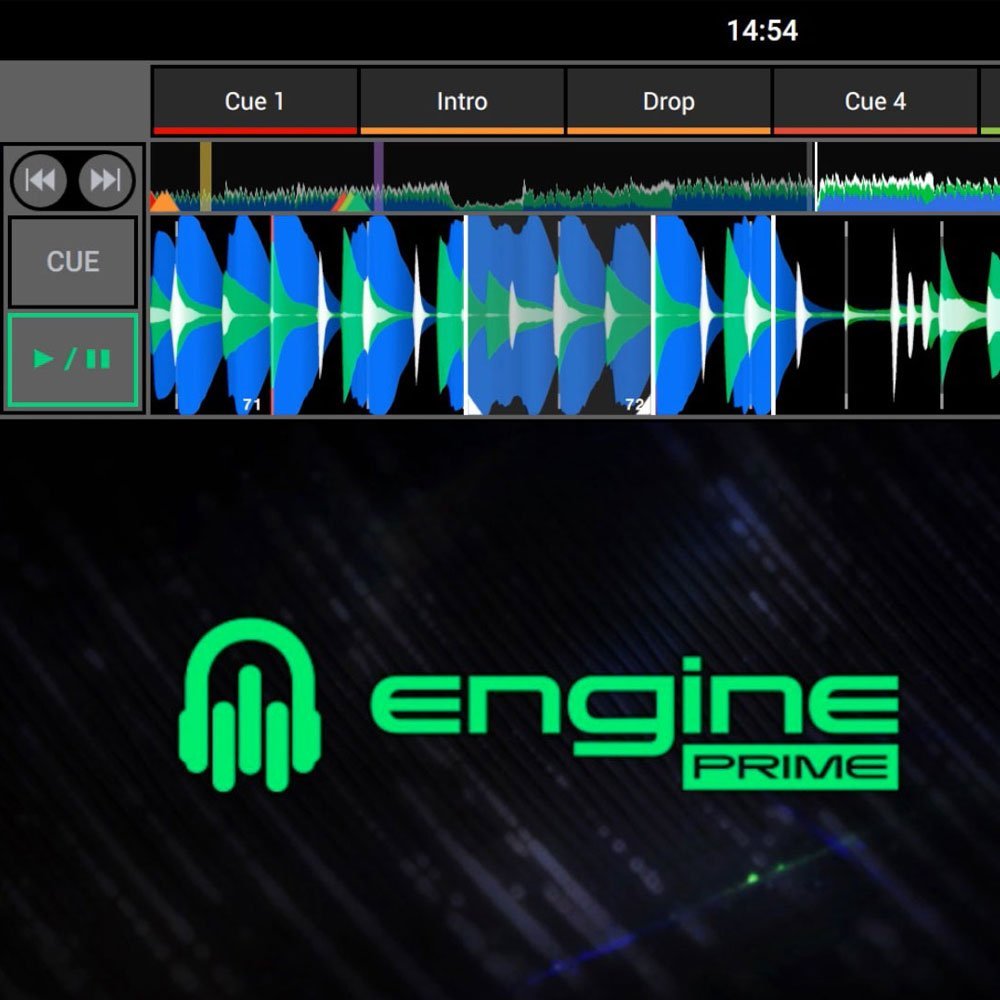 Two words… Dual Layer. The dual layer mode that Denon’s players have to offer is what really makes these players stand out over Pioneer’s current line up for me. We only actually had one player in the studio and we managed to perform a DJ set comfortably. This is groundbreaking for a standalone player and something that Pioneer should really be thinking about if they want to stay relevant.

Literally one touch of a button you have a whole new deck to work with. The two outputs from the back of the player easily plug into any mixer. Yes it can be confusing as to which deck you’re actually using, is it the left, is it the right? I do find it weird playing off one deck with two different tracks but it’s still amazing and something you would very easily get used to.

Imagine, in most clubs the resident DJ rocks up and has two CDJs and a mixer. If you don’t have the luxury of having a rider then you get what you’re given. A 3rd or even 4th CDJ is a rarity. Now imagine rocking up to a club and it still only has two players however you can now mix on 3 or 4 channels without the need for the club to hire or buy any extra equipment. This will force resident DJs to get more creative with their mixing, meaning a win for both the DJ, the crowd and even the club owners. Is the player worthy of being in clubs?

In short, YES. It feels well built, but only time will tell if it is. Something we have found teaching a new generation of DJs one to one at our studio in Leeds is that the 14, 15 and 16 year olds just getting into the industry don’t go out and buy a full club set up for at home. 99% of the time those new DJs will start with a controller. Most controllers now have the performance features such as slicer, roll, beat jump and dual layer decks amongst much more. We have found when those new DJs then decide they want to start playing in clubs, the transition from controller to CDJ can be quite huge. Where are the 3rd or 4th decks? Can I really only access 3 hot cues on the CDJ 2000NXS. How can I use the slicer mode? Without external midi controllers added to a club set up this stats to become a headache and impractical. These players from Denon really bridge the gap between controller DJ and club DJ. A controller DJ would feel at home with these players just as much as a regular CDJ user would too.

So what about Pioneer DJ?

Where does all of this leave Pioneer DJ? Are they going to be demolished from the industry with this new fancy player that is packed full of features?

Our answer, not quite yet. The fact that they have created such a strong dominating hold in the club scene over the past decade won’t be demolished overnight by one new player. However, it’s the closest anyone has come to rival the industry standard Pioneer equipment. Will this drive the prices of Pioneer CDJs down to compete. Again, I don’t think so. Only when Denon release a range of players at different price brackets will it start to affect Pioneer’s sales.

Even though this player is groundbreaking it still isn’t going to demolish Pioneer. I hope to see these players in some of the DJ booths I end up in and would welcome a variety of players to the industry as a whole.

It’s exciting to see another company create competition. I believe competition is healthy and will push Pioneer and other companies to innovate. It’s an exciting time to be a DJ. The creative features we have access to now provide endless possibilities. It allows the DJ to be more playful than ever with music. This can only be a good thing… can’t it?

Let us know your thoughts in the comments below…