In this article, we take a look back at the legendary Technics SL1200 range of turntables. These turntables made modern day DJ’ing possible and went on to not only create the industry, but dominate it for over thirty years.

But what made these turntables so special, and why after all these years are they still held in such high regard? In this full guide and review, we look at every model of the Technics SL1200 and SL1210 to see if they are still, the best DJ turntable. An evolution of an even older model (SP-10), the SL1200 was released in October of 1972. The original SL1200 initially became popular with radio and broadcast DJ’s due to its direct drive motor. Removing the belt drive system gave the turntable brilliant torque, this in turn allow the turntable to get up to speed almost immediately.

The direct drive motor was also very accurate and kept the play back speed consistent, this in turn reduced wow and flutter in the playback. Designed to adjust the playback speed incase of poor calibration, the speed adjustment dial was quickly adopted by DJ’s to help beat match songs together. The most popular variant of the SL1200 family, the MK2 was produced from 1978 until 2010. The turntable was much more than a revision of the original 1200, despite the name. Designed from the ground up, the new SL1200Mk2 is the design that all further models improved upon.

The SL1200 MK2 was a brand new design that featured excellent isolation, an accurate motor and fantastic sound quality. Technics at the time used the tag line “Tough enough to take a disco beat and accurate enough to keep it”.

The design was the first time a turntable could absorb the frequencies and vibrations from being played in a loud environments such as clubs and bars. As such, it went on to be the industry standard for DJ’s around the world. A cult status that this 30 year old turntable still holds to this day.

The direct drive motor was upgraded to feature a quartz lock, improving the accuracy of playback speed. The speed adjustment dial from the original model was replaced with a pitch fader, something that would go on to be a standard feature on all future decks.

The Technics SL1200MK2 turntable was sold in Europe under the SL1210MK2 model name. This European model featured a darker grey colour where as the SL1200 sold in American and Japanese markets came finished in silver. The SL1210 models also featured a switchable voltage and slightly different wiring. A switch under the platter allows the user to switch between 110-120V and 220-240V. 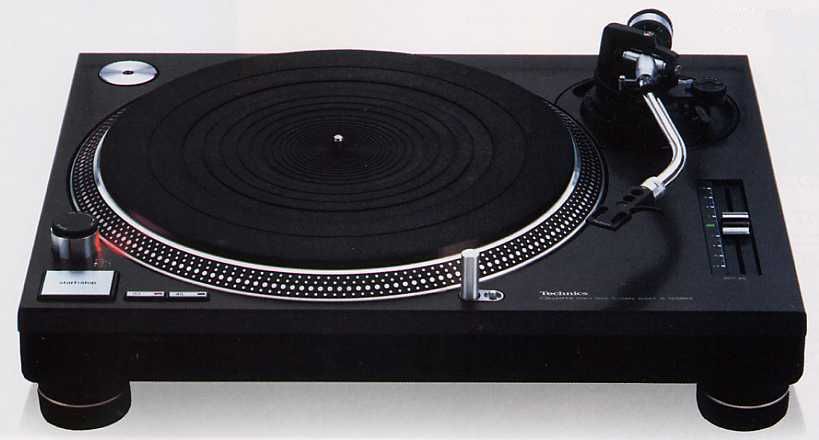 Intended for sale in Japan only the SL1200MK3/D came in a new darker colour. The model featured gold RCA cables and a foil sticker on the back of the turntable. The SL-1200 Limited Edition was released in 1996 to celebrate 25 years of the original 1200 model. Only 5,000 units were made and featured a striking black and gold finish. Like the MK3D, it has a quartz lock button but also retains the zero indent within the pitch fader. Aimed at the audiophile market rather than the DJ, the MK4 saw Technics improve the tone arm and audio properties of the deck. With a titanium tone arm and oxygen free copper wiring, the MK4 also featured a 78RPM playback speed.

Available in Japan only, the high cost of import to other markets has made the MK4 a rare model. 1997’s M3D model brought two main revisions to the SL1200. The pitch fader’s indent click at zero was removed and replaced with a physical pitch reset button. This allowed for tighter control of the BPM when beat matching and removed the dead spot that some older faders would develop over time.

The M3D also removed the dust cover hinges from the rear of the deck. Finally the strobe light was changed from red to a more subtle orange with the power switch recessed into the assembly to prevent accidental knocks. Release Date: November 2000
The MK5 edition of the SL1200 revised the anti skate functionality, increasing the range from 0–3 grams (0–30 mN) to 0–6 grams (0–60 mN).
The problematic dust covers where redesigned with magnets to remove the hinges which would often snap. Finally the target light was updated to feature a white LED rather than the older incandescent bulb. Release Date: November 2000
The M5G was introduced to celebrate the 30th anniversary of the 1200 line. Painted in silver speckled gloss black, it featured blue illumination of both the target light and pitch number, as well as an entirely digital pitch control offering both 8% and 16% pitch ranges.
Smaller improvements were also made to the tonearm including the wiring, which was replaced with OFC copper wire throughout to increase the audio properties. Release Date: November 2004
Released to celebrate the 3 million turntables sold by Technics in the last 30 years, the GLD model was based on a standard M5G model. Limited to just 3000 units world wide with 500 reserved for the Japan market alone, the SL1200GLD is one of the most rare model.
The unit was once again finished in black and featured gold plated features. Although visually very similar to the earlier SL1200LTD model, the gold is a different shade meaning parts can not be swapped between. In 2008 Technics released the SL1200MK6. The MK6 focused on very minor improvements including improved tonearm mounting and oxygen-free copper wire. The MK6 materials improved vibration damping within the body of the deck. FInally, the pitch fader accuracy was improved upon. The last limited edition model before the SL1200 was discontinued in 2010, the K1 was a MK6 turntable finished in matt black. Only a 1200 models were released and each model came bundled with with a booklet and gold record. After discontinuing the entire range of SL1200 turntables in 2010, Technics returned in 2016 following an online petition and resurgence in vinyl. The SL1200GAE however was a far cry from the DJ turntables that proceeded it. Aimed at the audiophile market, the GAE was a limited edition model with just 1200 models released to celebrate 50 years of the Technics brand, each model costing $4000. The none limited edition SL1200G model was released later in the year. Both models featured a magnesium tonearm and new motor design. With the SL1200G being aimed at the audiophile and high end home user, Technics released the SL1200GR to be the more accessible model. Priced at a more reasonable £1299, the SL1200GR was based on the previous years technology however some cost cutting had been made. Addressing the DJ’s cries for a turntable designed around them, the Technics SL1200Mk7 was released in early 2019. The matte black paint job was finished with LED lighting. This can be changed from Red to Blue with switches found under the platter. Other changes can be made to the motor torque, the start/stop speed and also the advanced playback features.

The platter can be played in reverse or used to playback in reverse. These features plus removable power and RCA cables made for a dream turntable for DJ use, however sadly the MK7 is lighter and feels cheaper than the older models of Technics. Possibly due to the fact this new MK7 model is manufactured in Malaysia rather than Japan.

Looking to buy a pair of Technics turntables? Here are the main things to check on second hand models!

Arm Bearings: The tone arm assembly should move freely and show no signs of play. Check the lift mechanism, counter weight and bearings to ensure the tone arm is solid and moving properly.

Pitch Control: The motor and pitch fader should be calibrated to accurately control the playback speed. Use the dots on the edge of the platter to check that the fader is accurate. When at playing at zero the big dot should stay solid.

Screws: Check the underside of the turntable for missing screws. This is a classic sign of previous poor repairs.

RCA Plugs: Turntables that have been used for DJ’ing will have been plugged in and out of many mixers. The original models RCA cables wear over time. Check for a strong connection and solid signal, especially when purchasing for DVS use.

Play in motor/platter: Spin the platter when the turntable is powered off. Feel for any wobble in the assembly and ensure the platter spins freely in both directions with no grit or resistance.

The entire range of Technics SL1200 and SL1200 turntables can be customised and refurbished. We recommend sending any second hand purchase to a service centre if calibration is required or issues are found.

We recommend searching for a reputable service centre local to yourself as shipping can be expensive given the weight of the decks. Here in the UK, we recommend using Technics Worx who helped us put together this guide. A huge thanks to Neil and the team!

Learn to DJ with Crossfader!

Here are some of the best suited DJ courses for users of the legendary SL-1200!